His name is listed on other sites spelled "Ahern" but newspaper articles and St John's University spells it "Ahearn," which might be part of the initial research problems.

He went to St John's, but according to a Brooklyn Eagle article, it sounds like Ahearn only lasted one year there due to performance and attitude. This seems to be confirmed by St John's lettermen records. He joined the Detroit Eagles in 1940, and later played basketball for the Army during World War 2, stationed at Lincoln (Neb) airfield. He joined the Wilmington Blue Bombers for their ABL Championship series in March of 1944, and after the war played a couple seasons with the Baltimore Bullets.

Ahearn was working in the accounting department at Newsweek Magazine at the time of his death. 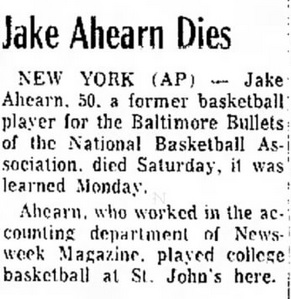 Posted by Peach Basket Society at 4:52 AM