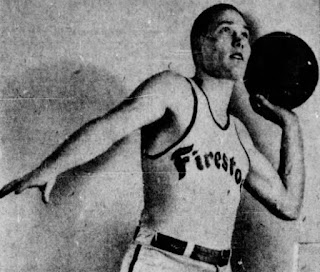 
Born to Michael and Mary O'Brien in New York, Tommy O'Brien was an all-American at GW. He played pro basketball in the ABL, signing ith the Jersey Reds on November 20, 1938, before moving to Akron to join the Firestones. After serving in the South Pacific during World War 2, O'Brien worked as a zone truck manager for General Motors in Texas. He died in Texas at the age of 39 of Nephrosclerosis.


He was married to Mary.


Stats:
http://www.basketball-reference.com/nbl/players/o/obrieto01n.html
http://www.justsportsstats.com/basketballstatsindex.php?player_id=lloydbi01
Posted by Peach Basket Society at 5:38 AM