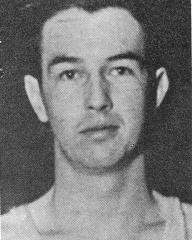 
In high school, Dar played as a sophomore on the Illinois state champions from Thornton High School (along with Lou Boudreau) and also on the two runners-up teams in his junior and senior year. He moved on to star at Bradley, which followed with two professional seasons at Hammond. He enlisted in the army in July of 1941 and served during World War 2. After his playing days, he worked as a salesman for Wilson Sporting Goods for 23 years.

He married Margaret and had a son, Gregory.

Stats:
http://www.basketball-reference.com/nbl/players/h/hutchda01n.html
http://www.justsportsstats.com/basketballstatsindex.php?player_id=hutchda01
Posted by Peach Basket Society at 7:54 AM