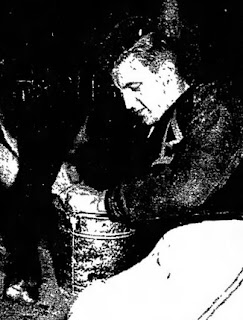 The 6'8 center played one game for Hammond. Residing in St Louis at some point, it is hard to believe a guy this tall did not play somewhere else, collegiate or pro.

Couple of hot tips. I think I found out who he is.

There is a James C. Higgins who pitched in the minor leagues in the late 30's and early 40'. The southpaw is listed as being 6'7 and 220 pounds. He played out east mainly in the Athletics' farm system, but spent the 1940 season with Appleton in the Wisconsin League. A newspaper article from August 31, 1940, says he is 6'8. This puts him in proximity of being able to suit up one time for Hammond. I am very sure it is him.

I found a Jim Higgins who played at Olney HS in 1935-36 and was a center. The Decatur Herald confirmed that the Olney center decided against attending Northwestern to play basketball, and instead signed with the St. Louis Browns of the American League.

Ancestry.com search found Higgins in Olney. I am closing the book on this one.

Born to James and Bertha Higgins, Higgins baseball career consisted of four season in the minor leagues. He later work for GTE and died in 2002.

He and his wife, Verlyn, had two daughters.


Stats:
http://www.basketball-reference.com/nbl/players/h/higgiji01n.html
http://www.justsportsstats.com/basketballstatsindex.php?player_id=higgiji01
Posted by Peach Basket Society at 8:25 AM