From Akron, O'Toole played one game for Hammond, joining the team briefly (along with Bill Sumerix) for one road game in Akron following the resignation of two of the club's players just days before: Ralph Vaughn and Bill Behr. O'Toole and Sumerix were referred to as "ancient Akron stars" in the newspaper article.

When I found Thomas Patrick O'Toole (1913-1983), it put him out of Akron, which matched and made him likely. But what sealed the deal for me was he worked at General Tire in Akron, where Bill Sumerix worked. That is enough for me to say that this is our guy.

Married to Helen Coen and had a son and two daughters. 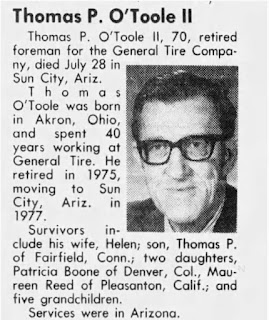 Stats:
http://www.basketball-reference.com/nbl/players/o/otoolto01n.html
http://www.justsportsstats.com/basketballstatsindex.php?player_id=otoolto01
Posted by Peach Basket Society at 6:35 AM