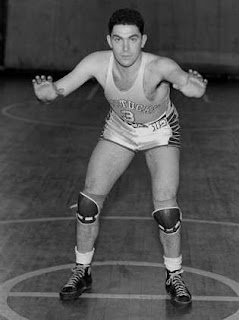 In High School, he saw Kentucky play at Madison Square Garden and wrote coach Adolph Rupp to ask to play there. He was all-SEC in his junior year and all-American in his senior year. After graduation, he played for the Detroit Eagles, before joining the army in 1942. He played with Philadelphia SPHAs in the ABL after serving in World War 2. He later worked as a housewares salesman before dying in LA at 84.

Stats:
http://www.basketball-reference.com/nbl/players/o/opperbe01n.html
http://www.justsportsstats.com/basketballstatsindex.php?player_id=opperbe01
Posted by Peach Basket Society at 6:50 AM