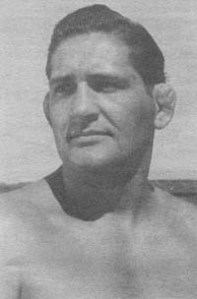 He is listed on various sites as "Hal Bosch," but after seeing his name in some boxscores spelled "Boesch" and seeing this article by Paul Boesch, the wrestling legend, I believe that the Hoboken player is indeed the wrestler.

Born in Brooklyn, Boesch's family moved to Long Beach, New York, where Paul turned his interests to athletics. He was a swimmer and played basketball, but would eventually become a professional wrestler. He was a very popular wrestler, and did very well during the Depression, traveling as far as New Zealand to wrestle. He served in the U.S. Army during World War 2, decorated with a Silver Star, Bronze Star, Purple Heart and a Combat Infantry Badge, among other awards. In 1947, a near-fatal car accident ended his career as a wrestler, but now living in Houston, we would go on to be a successful announcer and promoter for the sport. Boesch suffered a fatal heart attack in 1989, and was elected posthumously to the Pro Wrestling Hall of Fame in 2005.