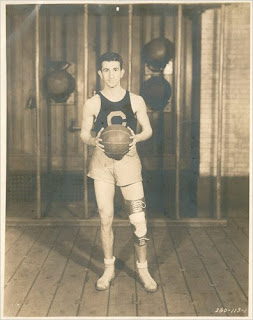 A high-scoring player who twice lead the Eastern Intercollegiate League (now known as the Ivy League) in scoring, Bender graduated in 1932 and started playing professionally. During this time, he continued with his education and graduated from Columbia with a Law Degree in 1935. He played basketball a few more seasons before devoting his full attention to his legal career. He was a very well-known trial lawyer and was a assistant U.S. attorney in the Southern district in New York. He practiced law for over 50 years, specializing in the defense of tax evasion. He died in 2009 after a short battle with cancer at the age of 99.

He married Jean Waterman, his wife of 75 years, in 1934 and they had two sons and two daughters.

Posted by Peach Basket Society at 6:45 AM