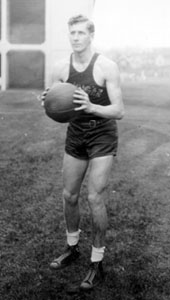 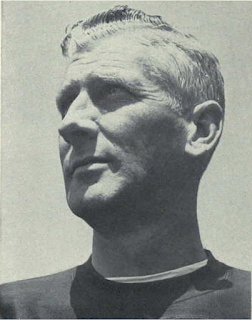 McCoy was born in Pittsburgh but grew up in Detroit. He would go on to play at the University of Michigan and after graduating played in the NPBL in Detroit (the club would move to Jackson later that year.) He headed out east to work as a coach and teacher at Montclair High School while getting his Masters Degree in Physical Education at Columbia. Coaching football, he was also named Athletic Director there and later at Montclair Teachers College. He returned to Michigan in 1940, working as assistant football coach and assistant AD under Fritz Crisler. He was also an assistant coach for the basketball team for a year before being named head coach. He left Michigan in 1952 to become AD at Penn State, and would stay there until retiring in 1970. His retirement was short-lived, as in November of 1971 he became AD at Miami in Florida. He finally retired for good in 1973.

Posted by Peach Basket Society at 11:42 AM