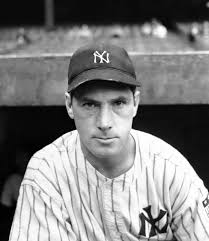 Buddy was a very talented athlete who played baseball and basketball professionally. Born to John and Hannah Hassett in Hell's Kitchen, Buddy and his three brothers all played college basketball. Brother Billy would play the game professionally, also. The captain of both the baseball and basketball team at Manhattan, Buddy was signed by the New York Yankees baseball club following his graduation in 1933. In his first three years in the minors, Hassett batted .332, .360 and .337 and even stole 56 bases for Norfolk in 1934. At this time, however, the first baseman realized that the Yankees was not his best option, since Lou Gehrig has holding down the first base job for the Yanks, and Hassett asked to be traded. He was sent to the Dodgers where he would play three seasons, batting .304. By the time he was traded, Hassett had played basketball in the off-season. including two tours in the ABL. Now in baseball's National League, he quit playing hoop (although he would play a little bit for the basketball version of the Yankees in 1938-39). A solid contact hitter who rarely struck out, Hassett found himself back with the Yankees in 1942 after three years with the Boston Braves. The Yankees won the World Series that year, and after the Series, Hassett joined the U.S. Navy and served the country as a physical education instructor and trainer. After the war, he didn't return to athletics and instead took a job at Eastern Freightways and in his 40 years there would reach the level of vice president. He had to work through his 80's due to the lack of pensions for pre-1947 baseball players. Hassett also enjoyed singing and was always ready to belt out favorites such as "When Irish Eyes Are Smiling." Hassett was 85 when he died of bone cancer in 1997.

Buddy married Veronica Mackin in 1942 and they had two daughters.

Posted by Peach Basket Society at 8:04 AM