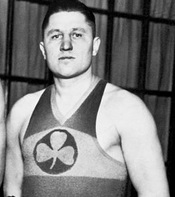 New York's Dutch Dehnert was an early star of the game. A long-time star with the legendary Original Celtics, Dehert played with many different teams in the late teens and early 1920's before finally latching on with the Celtics. The most popular barnstorming team, the stocky Dehnert made a name for himself as a player and a leader on the court. It was only natural that he would eventually become a player / coach, and then a head coach. 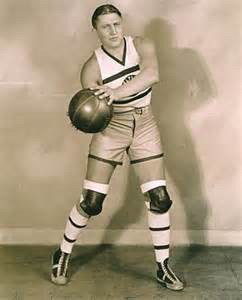 The Original Celtics joined a few leagues in the east as well as barnstorming, and when the Celtics took the place of the Brooklyn team early into the 1926-27 ABL season, Dehnert stayed with them through the 1927-28 season when he moved to the Cleveland Rosenblums. He would return to the Celtics when the ABL shutdown during the Great Depression. After playing through the 1930's, he quit playing and became a full-time head coach. He lead the Detroit Eagles of the NBL in 1940-41 season, and also the nexst year when the Eagles left the NBL to play independently. He headed back to New York in mid-season, finishing the Saratoga Indians season at the helm. He coached a couple seasons in the reborn ABL before returning to the NBL to lead the Sheboygan Redskins. This lead to him coaching the BAA's Cleveland team in that league's inaugural season in 1946-47, then the Chattamooga Majors in the PBLA in that ill-fated league. Once the PBLA disintegrated, he returned to Saratoga to coach two more seasons. Widely credited with developing the pivot play, Dehnert was elected to the Basketball Hall of Fame in 1969.

Stats:
http://probasketballencyclopedia.com/player/dutch-dehnert/
Posted by Peach Basket Society at 7:58 AM