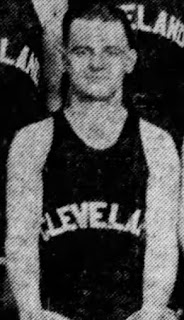 
Born to John and Anna Olszewski in Cleveland, Steve played some AAU basketball as well as two seasons in the ABL. Steve's younger brother, John, also played with the Union Trusts basketball team, but he played in the early 1930's after Steve quit playing.

His name sometimes is listed in newspapers as "Olszenski"


Stats:
http://probasketballencyclopedia.com/player/steve-olszewski/
Posted by Peach Basket Society at 4:39 AM