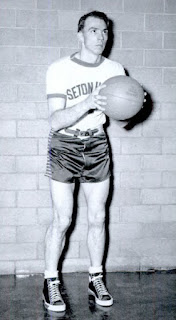 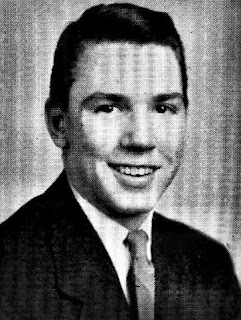 Born to Sophie and Harry Hammock, Hammock played basketball and baseball at Seton Hall Prep. He played both sports at St. Bonaventure for a year before joining the U.S. Army. After the war, he enrolled at Seton Hall where he played both sports with great acclaim. After graduating, he signed to pitch for Wytheville in the Class-D Blue Ridge League in 1949. He pitched well, going 7-4 with a 2.77 ERA. After baseball season, he played pro basketball with the Hartford Hurricanes and the Trenton Tigers in the ABL. 1950's baseball season saw him with Bristol in the Colonial League (Class-B but unaffiliated with any major league club.) That was his last season in organized baseball, although he apparently played some more basketball in the ABL with Carbondale in 1951-52. In 1960, Hammock moved to Oklahoma City where he owned his own insurance agency. He died in 1965 at the young age of 40.

Dick and his wife, Minna, had four sons and a daughter.

Stats:
Posted by Peach Basket Society at 11:01 AM