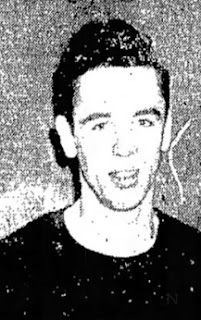 Born to John and Delia Pemrick, Jim played football and basketball in high school and in college. He would briefly play in the ABL, in four games with Cohoes when the Trenton team moved there. He worked for Capitol Newspapers in Albany for 19 years before taking a managerial position at Fulmont News Company in 1967. In 1972, he took a job opportunity in Sarasota, Florida, but became ill and died seven months later.

Pemrick married Rosemarie Martin in 1948 and they had three sons and three daughters.

Stats:
Posted by Peach Basket Society at 10:01 AM

Email ThisBlogThis!Share to TwitterShare to FacebookShare to Pinterest
Labels: 1949-50, Cohoes Marras, under 50