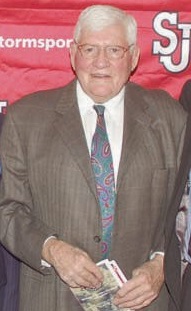 Tolan went to Manhattan prior to going off to serve in World War 2. After the war, he became a policeman while also going to St. John's, becoming eligible in February of 1947. Tolan graduated in 1949, after playing a couple years with his younger brother John on the squad. He later became an FBI agent.

Tolan would later work for over 40 years for UPI, where he would become the sports editor. Married to Barbara.

Stats:
Posted by Peach Basket Society at 9:50 AM