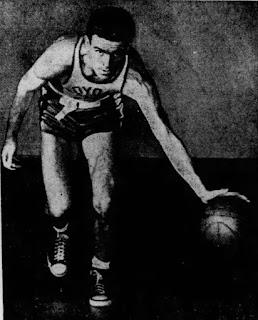 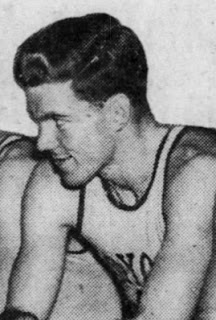 Bob went to West Side High School in Newark, New Jersey, where he played football but never played basketball. He went to Panzer for a year before joining the U.S. Army in 1945. After his service, the 6'5, 195-pound athlete went to Loyola University in Baltimore. After graduating, he was drafted in the sixth round by the NBA's Tri-Cities team in 1950. Unable to make the team, Anderson played one game with Bridgeport in 1950-51. He signed with Carbondale January 23, 1951, but not sure if he ever played for them. Next year, he was back for one more run in Bridgeport.

The February 15, 1928 birthday doesn't fit with his time at Panzer. Makes him too young.

Possibly Robert C. Anderson. He is from Newark and is listed at 80 inches in height on his military draft record.

Stats:
Posted by Peach Basket Society at 8:28 AM