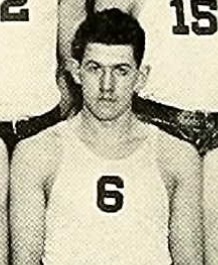 A graduate of Butler,  Armstrong played four seasons in the NBL. After a season with Fort Wayne, he moved to Oshkosh where he was an all-star. He then moved to Indianapolis, where he played a couple seasons and was also an assistant coach under Tony Hinkle back at Butler. He served in the Navy before entering education and coaching high school track, football, baseball and, of course, basketball. He was the long-time principal at New Haven Junior High School until he retired in 1976.
He was the brother of fellow hoopster Paul "Curly" Armstrong.
He married Barbara Jean Rose on May 28, 1949.

Posted by Peach Basket Society at 10:25 AM