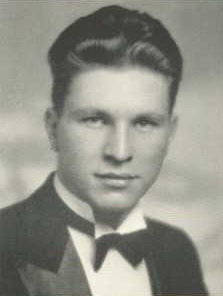 Ochsenhirt was a basketball star in college at Pittsburgh, where he obtained a degree in Electrical Engineering. He was the captain of the Wingfoots in the inaugural season, leading the team to the first NBL title. After his basketball days, he was vice president of Botzum Brothers, president of Ohio Sand & Gravel Products, and president of Ohio Ready Mix Association. He was married to Rose Botzum (1916-1996) and had seven children (daughters Terry, Bonnie, Mary and Jean, sons Mike, David and Tim).

Email ThisBlogThis!Share to TwitterShare to FacebookShare to Pinterest
Labels: 1937-38, 1938-39, Akron Goodyear, MBC, over 90