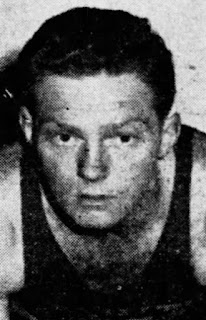 Tough guy to track down, but after rummaging through issue after issue of the Trinity College Newspapers, I found an interview that gave me his month and year of birth. That opened the door.

Faber played baseball and basketball at Newtown High School in Queens before entering the U.S. Navy and their V-12 training program at Cornell. He managed to play 4 games for Cornell, and was then transferred to the V-12 program at small Trinity College in Hartford. He stayed at Trinity when his service was done, and when he graduated he had scored more points than any other Trinity player. The 6'2, 200-pound center went on to play for the Hartford Hurricanes in the ABL. In 1969, he was working in New York as an executive Vice President for Computer Tutors Corporation.

Posted by Peach Basket Society at 10:28 AM