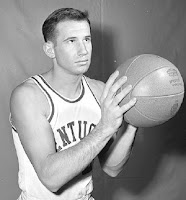 Born in Fairfield, Connecticut, to Peter and Eva Homa, Mickey lettered in basketball, baseball and golf in high school. He entered the Marines after graduating, and served mainly in Iceland during World War 2. After the war, he played basketball for Adolph Rupp at Kentucky, but left school after one year. He would return home and play in the ABL for three seasons.

Aside from being a good basketball player, Homa was an excellent golfer, honing his craft under the instruction of the legendary golfer Tommy Armour. making the cut in two U.S. Opens (1953, '56) and one PGA Championship ('59). He worked for many years at various clubs as the golf pro, retiring in 1995.

He married Wanda Soltys in 1951 and they had two sons.

Stats:
http://probasketballencyclopedia.com/player/mickey-homa/
Posted by Peach Basket Society at 5:20 AM