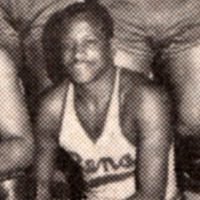 The speedy basketball star played for the Globetrotters and the Rens before joining the ABL. He played in the ABL for 5 seasons, and later would work the the NYV Parks and Rec department to work with youngsters as a coach and mentor. His father, Clarence, was a talented semi-pro player in his own right.

Stats:
http://probasketballencyclopedia.com/player/eddie-younger/
Posted by Peach Basket Society at 7:54 AM