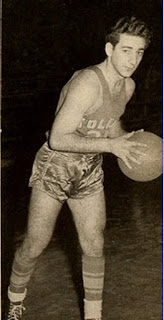 Possibly the same Paul Wallace who played for Toledo Chevrolets in 1941-42.

Wallace graduated from Overbrook HS and went into the U.S. Army. After the war, he enrolled at the University of Toledo and played basketball there two years. He played briefly for the SPHA's in the ABL.

He and his first wife, Mollie, had two sons. He later remarried to Carolyn.

Stats:
Posted by Peach Basket Society at 9:52 AM