Born to Thorvald and Alina Johnson, who came to the U.S. from Sweden, Ernie played baseball and basketball in high school. After high school, where he had a great senior year on the pitcher's mound, Johnson attracted the interest of the Boston Braves, and was offered the option of a minor league contract or travelling with the Braves to throw batting practice. He chose to travel with the big club, getting experience throwing to major league hitter. After about a month, he signed with the Braves and spent the rest of the 1942 season pitching for the team's Eastern League affiliate in Hartford. After the season, he was drafted into the Marines for World War 2, so his baseball career would have to wait. 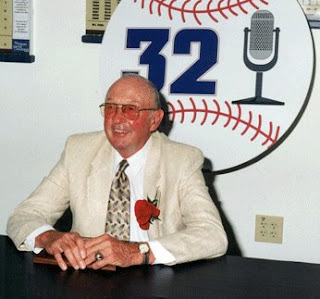 After the war, Johnson returned to the diamond and would bounce around the Braves system. In winter of 1948/49, he suited up to play basketball with the Bridgeport Steelers in the ABL. After going 15-5 for Denver in the Western League in 1949, he was invited to the Braves' 1950 spring training camp and went north with the parent club. After struggling through 16 appearences with the Braves what saw him with a 6.97 ERA, he was sent back down but would return to the club for good in 1952. He would pitch the next seven seasons with the Braves, who had moved to Milwaukee after the 1952 season, and then one more with the Orioles in 1959. He signed with the Indians in the off-season, but a bad arm prevented him from ever throwing a pitch for them and his pitching career came to an end. He had gone 40-23 in his career, primarily coming out of the bullpen.

Johnson moved in to the Braves broadcast booth, starting with doing 20 games a year, and then in 1962 was brought in to work in the Braves' front office. Eventually, he moved back into broadcasting, and was the full-time voice of the Braves through his semi-retirement in 1989. He was still associated with the Braves in the years that followed, and died of heart failure in 2011.

Posted by Peach Basket Society at 9:30 AM