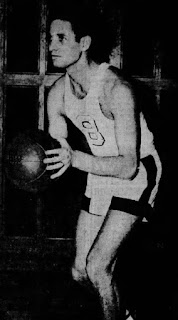 
Born to Benjamin (1884-1960) and Lena Dubin (1888-1977), Lewis was a basketball, football and baseball star at Germantown HS and aftergraduating would go to Temple. In September of 1933, while in college, Dubin was in a car accident that left him in very serious condition with a ruptured spleen. He would eventually recover and return to the court with Temple. After graduating, he played a little pro basketball with the Reading Keys and the SPHA's. He died in 1979.

He was married to Jan.

Posted by Peach Basket Society at 4:49 AM