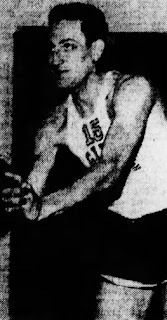 One of the greatest Jewish players of his era, Fliegel played baseball and basketball at CCNY and a week after graduation joined Kate Smith's Celtics. He was voted the second best college player in 1938 as well as the best player in New York. He would also enrolled at Fordham Law School and would continue to play while going to school. He played in the ABL until joining the U.S. Army to serve during World War 2, and would return to the game after the war. He practiced law in New York for many years, even defending CCNY assistant coach Bobby Sand in the point-shaving scandal of the early 1950's. He eventually moved to Naples, Florida, where he practiced law part time before retiring for good in 1976. He was a skilled senior tennis player into his 70's, and he was 91 when he died in 2009.

He was married to Marcella.

Posted by Peach Basket Society at 6:28 AM