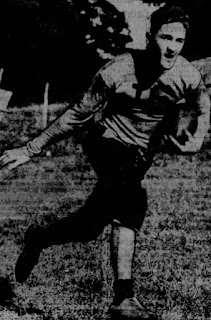 Born to Bernard and and Alice Buscher, Bernie was a multi-sport athlete at Maryland, playing basketball, baseball, football and lacrosse. After graduating with a degree in agriculture, Buscher played professional basketball for a few years before becoming a detective with the Washington Metropolitan Police Force in 1943. He remained there until 1948 when he took a job with the FBI, retiring in 1974.

He is the younger brother of fellow basketball player Bucky Buscher. Bucky and Bernie were teammates for one year at Maryland as well as with the Brewers.

Bernie married Mary Hunter in 1938 and they had a son and a daughter.

Posted by Peach Basket Society at 11:30 AM