Born in Canada, Gino Sovran was a track athlete in high school, which helped him to pick up basketball quite easily. In his three years at Assumption (now the University of Windsor), he scored over 1000 points and was one of the better known college athletes in Canada. The cancellation of the 1944 Olympics due to World War 2 prevented Gino from his desire to play in the Olympics. After graduating from Assumption, he ventured over to the University of Detroit where he enrolled in the engineering school. He wound up leading the Titans in scoring.
In 1946, Sovran discovered that his basketball eligibility had run out due to his time at Assumption, despite being in a different country and collegiate organization. As the fall semester was coming to an end, Sovran, like most engineering students, was facing his co-op semester where students work in the industry for a semester to gain real-world experience, and then return to college to continue their degree program. Sovran was approached by the Toronto Huskies of the newly-formed BAA to try-out for the team. The Huskies, lead by New Yorker Ed Sadowski, had stocked his team largely with cronies from the Big Apple, but felt that a few Canadian players would be a good drawing card for the team. Along with fellow Assumption graduate (and Italian-Canadian) Hank Biasatti, Sovran signed with the Huskies to play for his co-op semester. 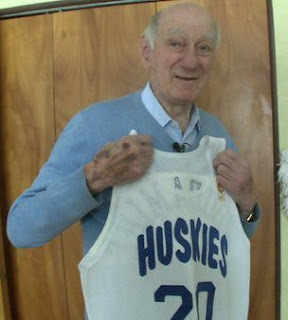 Used sparingly, Sovran was informed late in December that he was being let go from the team, which was fine with him, since he was do to return to classes in January of 1947. He graduated from the University of Detroit and went on to the University of Minnesota where he got his doctorate in engineering. He worked at General Motors in Warren, Michigan, for 30+ years as a research engineer and was still writing technical papers for the automotive industry as he approached 90 years of age. He often expressed that his only regret was to never be able to represent his country on the court in the Olympics, as well as never taking the time to see George Mikan play despite being in Minneapolis at the time Mikan played there. Despite his brief professional basketball career, he took great pride in his accomplishment as an engineer and knew that if he had continued to pursue basketball, he would not have been in Minnesota to meet Kathryn, who would be his loving wife for many years until her passing. They had three sons and a daughter, of whom he was not shy about expressing his pride.

When Dr. Sovran died in June of 2016, he was the last surviving member of the Toronto Huskies.

Stats:
http://www.basketball-reference.com/players/s/sovragi01.html
http://www.justsportsstats.com/basketballstatsindex.php?player_id=sovragi01
Posted by Peach Basket Society at 7:30 AM

Email ThisBlogThis!Share to TwitterShare to FacebookShare to Pinterest
Labels: 1946-47, over 90, Toronto Huskies