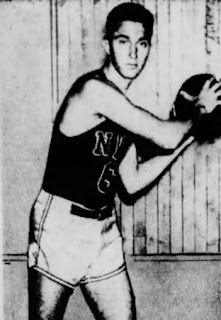 Born in Brooklyn, Sid Tanenbaum starred at NYU, scoring just under 1000 point in his time there. He played a couple of seasons in the BAA before retiring, with travel being too much for him and not believing the league had a future. He returned to NYC to raise a family, but continued to play basketball recreationally through his 50's. He also played tennis and late in life gave a try at karate.
In September of 1986, Tanenbaum owner of Able Metal and Stamping in Far Rockaway, was at work when he was stabbed in the back with a steak knife. He died a short time later. 37 year-old Molly Dotsun was arrested a short-time later. Apparently she became irate when Tanenbaum wouldn't loan her $25. Dotsun was found guilty of manslaughter and sentenced to 7-21 years in prison.

Sid was married to Barbara Wolfson and they had two sons.