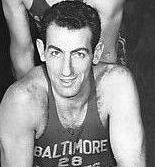 The center for the Trenton HS team starred for three years at the school before heading to Temple. He joined up with the SPHA's after graduating, beginning a lengthy professional basketball career that last through the 1940's. He is commonly regarded as the finest Jewish player in baskeball history.

After his basketball days, he invented a pipe cleaner (pat. US3414926), which these days is known as a snake to clean out pipes.

He was married to at least twice (first wife Gertrude?), and had a son who died as a teen in a shooting accident, and a step-son who died in a car accident.