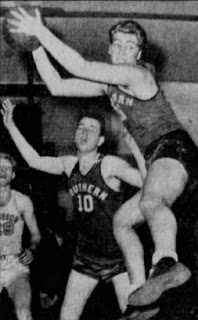 Known as "Loady" (a nickname he apparently was not all the fond of), Brown went from high school straight to professional basketball, signing with the SPHA's in the ABL. Not even 18 years of age, Brown scored 11 points in this first pro game and wound up finishing fourth in the ABL in scoring. He joined the Warriors and played 19 games. He returned to the SPHA's for a couple more years and then over to Trenton. He returned to the Warriors in 1951, 22 years of age but already a veteran of four pro seasons.

He later worked for the Philadelphia Bulletin as a truck driver. In 2009, he entered the hospital for a hip replacement, but suffered a heart attack before the procedure and died. He was 80 years old.


Stan was married to Loretta and they had a son, Scott.

Stats:
http://www.basketball-reference.com/players/b/brownst01.html
http://www.justsportsstats.com/basketballstatsindex.php?player_id=brownst01
Posted by Peach Basket Society at 10:27 AM