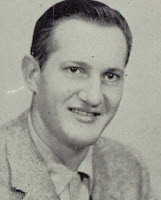 Gemberling was drafted by the Baltimore Bullets of the BAA in 1948, but did not make the team. He would sign with the Scranton Miners and averaged about five point per game. He also tried his hand at baseball, pitching for the New Bern Bears in the Coastal Plain League in 1950 and 1951. He would go on to become a teacher at Donegal High School in Mt. Joy, Pennsylvania. He later worked at Penn State as director for the Institute for Motor Fleet Training in Division of Outreach and Cooperative Extension from 1967 to his 1984 retirement.

Posted by Peach Basket Society at 4:07 AM