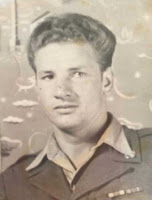 Leo was a star football, baseball and basketball player in high school. He learned to be a pipe fitter after graduating, but entered the U.S. Army for World War 2. After the war, he kept on with basketball, even playing one game with the SPHA's on February 3, 1949 and scoring one point. He played for various semi-pro outfits, but had his eyes set on the political world. In 1952, while chairman of the local Democratic party, Marshall was appointed to be the detective of New Castle County by Delaware governor Elbert Carvel. He would later enter politics, and was eventually was the Wilmington city clerk as well as Democratic chairman. He was known as a colorful authoritarian that you would definitely want on your side if you wanted to get things done in Wilmington. He left behind a legacy in his hometown.

Posted by Peach Basket Society at 9:54 AM