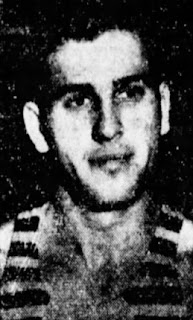 After graduating from Harding HS, Petrovick played some semi-pro basketball around Connecticut until the U.S. Navy came a-calling. After World War 2, he returned to the court, including two seasons with Bridgeport in the ABL. George would work at Sikorsky for 33 years, and was an avid golfer and active figure in Bridgeport sporting circle throughout his life. He died in 2016 at 94 years of age.

He married Anne Moyher (1921-1994) and they had two daughters. He remarried to Jean Mosher.

Stats:
Posted by Peach Basket Society at 4:11 AM