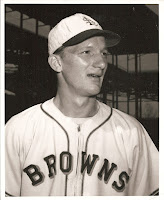 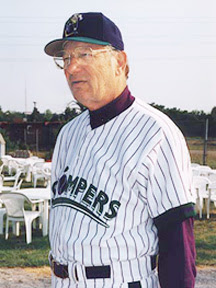 Born to Slovenian immigrants, Widmar played both baseball and basketball in high school. He was offered scholarships to college due to his basketball skills, but chose to play pro baseball instead. He signed with the Boston Red Sox in 1942, and would pitch well and eventually through the minor leagues to the parent club for a cup of coffee in 1947. After the season, he was part of a trade that sent him to the St. Louis Browns. He would pitch for the Browns in 1948 before being sent back to the minors, but a 22-win season in the minors 1949 saw him brought back up to the Browns in 1950. He would also, at this time, play some pro basketball in the off-season in the ABL. His major league career lasted through 1952 but would stick with minor league baseball through 1958. He would then become a coach for many years in minor and major league capacities.

Stats:
Posted by Peach Basket Society at 11:19 AM