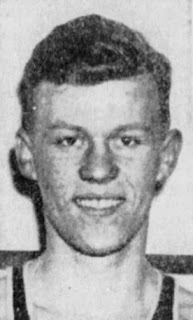 Born to Steve and Margaret Oslai, Joe served in the U.S. Army during World War 2. He played semi-pro and pro basketball for a few seasons after the war. He started working at Sealtest Foods in 1946 and was living in Devon, Connecticut, when he died in a Milford hospital in 1976 at 53 years of age.

Joe married Kathleen Duhamel and they had a daughter.

Posted by Peach Basket Society at 9:59 AM