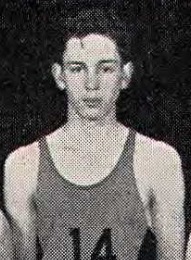 He worked for the city of Fairfield, Connecticut, as the Director of Risk Management and died in 1992.

(Note: The Hartford Courant from Feb 4, 1949, says it is Ed Lengyel. Why he played three pro games but was still in college is uncertain to me, but I do feel like I have correct Lengyel.)

Posted by Peach Basket Society at 9:50 AM