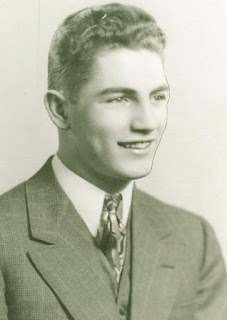 Cure was a great all-around athlete from New Bedford. He went to URI, and enlisted in the U.S. Army in 1943. He trained other soliders in judo and hand-to-hand combat in Europe, and after his discharge, he returned to Rhode Island where he played semi-pro football and also played basketball with the BAA's team in Providence. His semi-pro football play lead to played one game of pro football in the AAFC with the Baltimore Colts.

In 1949, he moved to California and got his master's degree from USC, where he coached football, basketball and baseball at the collegiate and high school level. He also taught advanced mathematics.

Stats:
http://www.basketball-reference.com/players/c/curear01.html
http://www.justsportsstats.com/basketballstatsindex.php?player_id=curear01
Posted by Peach Basket Society at 8:43 AM