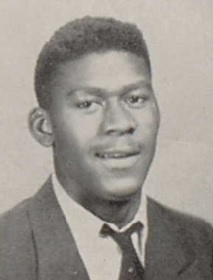 After a stellar career of basketball at Maryland State, McBride was drafted in 1952 by the Syracuse Nationals. However, he served in the U.S. Army prior to continuing on with his professional basketball career. After the army, McBride was released by the Nationals and signed by the Milwaukee Hawks. He started the season on a high note, pouring in 30 points against the Knicks in the Hawks' second game of the season. However, his game was little inconsistent and he by December of 1954 he was farmed out to the Kansas City Stars to polish his game up. He never returned to the NBA, and played a few more seasons with barnstorming independent teams.

Posted by Peach Basket Society at 3:59 AM