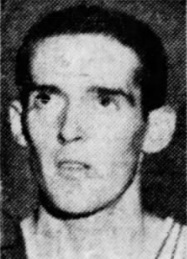 From Grand Rapids, Michigan, the 6'9 Art Spoelstra would score over 1500 points at Western Kentucky, leading the team to three straight NIT appearances and an 80-14 in his three years on the varsity team.

Drafted by the Rochester Royals, Spoelstra would play four seasons in the NBA, mostly with the Royal before splitting time between the Lakers and the Knicks in 1957-58. He played two years in the Eastern League after that. Art later worked as a stagehand on Broadway.

Art and his wife, Irene, had three sons and a daughter.

Posted by Peach Basket Society at 11:36 AM