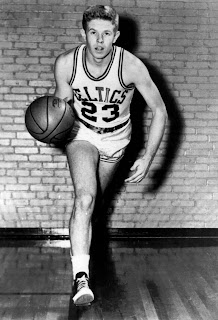 Ramsey would play baseball and basketball at the University of Kentucky. In 1952, the UK basketball program was suspended for a year due to a point-shaving scheme perpetrated by Wildcat players prior to Ramsey arriving there. Ramsey graduated in 1953 and was a first round draft pick by the Boston Celtics in the 1953 NBA draft, but Ramsey returned to UK for one more season, with the Wildcats finishing 25-0. However, Kentucky has to pass on the NCAA tournament due to a rule stating graduate students (like Ramsey and a few teammates who had also returned after the year off) were not permitted to compete. Ramsey would join the Celtics that fall and averaged 11.2 points in his rookie season. He was drafted into the U.S. Army, and missed the 1955-56 season but returned to the Celtics in January of 1957. All told, he would play nine seasons with the Celtics, with seven of those seasons as the NBA champions. He was a very versatile player, and was the first true "sixth man" in NBA history, coming off the bench and making an impact in limited playing time. He averaged 13.4 PPG in his career while playing in under 25 minutes per game. His number would be retired by the Celtics, and in 1982, Ramsey was elected to the Naismith Basketball Hall of Fame.

After retiring in 1964, Ramsey went to work at the bank his grandfather founder, and he was president of that bank in Dixon, Kentucky, until retiring in his 80's. In 2018, he suffered an aneurysm and died shortly thereafter of cardiac arrest.

Frank and his wife, Jean, had three children.

Posted by Peach Basket Society at 5:15 AM