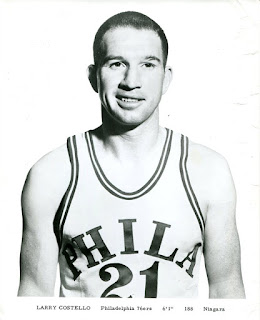 Costello hit the ground running at Niagara, helping the freshmen team to an undefeated season in 1950-51. He would lead the varsity team in scoring as a sophomore, and his three years on varsity lead the Eagles to the NIT twice. A tough and physical player, he would play 12 seasons in the NBA with the Philadelphia Warriors and the Syracuse Nationals / Philadelphia 76ers. He retired as a player in 1968 and immediately moved to the bench, being named the head coach for the Milwaukee Bucks. He coached the Bucks to the NBA title in 1971 with players such as Lew Alcindor and Oscar Robertson. He would coach the Bucks for eight full seasons and was fired 16 games into a ninth. Costello was one of the first head coaches to employ a full-time assistant on the bench. He returned to coaching in 1978 with the Chicago Bulls but was replaced by Scotty Robertson after a 20-36 start.

Stats:
https://www.basketball-reference.com/players/c/costela01.html
https://www.justsportsstats.com/basketballstatsindex.php?player_id=costela01
Posted by Peach Basket Society at 7:54 AM