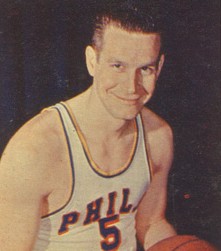 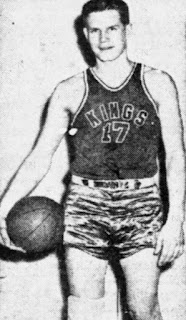 Following a stellar basketball career at King's College in New York where he scored 1316 points in his freshman and sophomore seasons, Dempsey served in the U.S. Navy during the Korean War. After the war, he would play 5 seasons in the NBA, primarily with the Philadelphia Warriors. After leaving the game, Dempsey worked for the Roosevelt Paper Company for 47 years.

George married Doris Lightcap in 1954 and they had four sons and one daughter.

Stats:
https://www.basketball-reference.com/players/d/dempsge01.html
https://www.justsportsstats.com/basketballstatsindex.php?player_id=dempsge01
Posted by Peach Basket Society at 9:54 AM