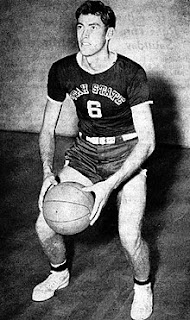 After a collegiate career at Utah State University that saw him named All-American, Cook would serve in the U.S. Army for two years before joining the New York Knicks. He would play 37 games for the Knicks in the 1954-55 season before a knee injury ended his career. His playing days over, he returned home to Utah and worked as the Weber County Sheriff as well as a recreational director for the Clearfield Job Corps. He would eventually run the family business at the Bert Cook Auction Company. He died in 1998 following a battle with cancer.

Stats:
https://www.basketball-reference.com/players/c/cookbe01.html
https://www.justsportsstats.com/basketballstatsindex.php?player_id=cookbe01
Posted by Peach Basket Society at 5:32 AM