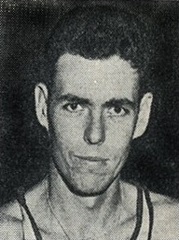 Born in San Francisco to Joseph and Rose McNamee, John graduated from St. Ignatius HS. After serving in the military during World War 2, McNamee went to USF and was a member of the great teams there in the late 1940's. He was drafted by the Rochester Royals in 1950, and on December 28, 1951 was sold to the Baltimore Bullets. After the 1952-53 season, McNamee returned to the Bay Area to raise a famil,y working for many years as a sales manager at Watson and Meehan.

Stats:
https://www.basketball-reference.com/players/m/mcnamjo01.html
http://www.justsportsstats.com/basketballstatsindex.php?player_id=mcnamjo01
Posted by Peach Basket Society at 11:03 AM