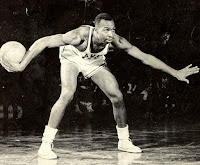 Born in the North View section of Clarskburg, West Virginia, Wilson went to Kelly Miller High School in Clarksburg (a "colored" school until the 1956 integration.) After playing at WVSU, he played a year for the Globetrotters before playing with the Milwaukee Hawks,but his NBA career ended with a knee injury. He moved to Newark where he was heavily involved in the city and YMCA.

He and his wife, Josephine Crozier, had four children

Stats:
https://www.basketball-reference.com/players/w/wilsobo01.html
http://www.justsportsstats.com/basketballstatsindex.php?player_id=wilsobo01
Posted by Peach Basket Society at 11:31 AM