Chuck Harmon, a gifted athlete who was the first black player on the Cincinnati Reds and had also played professional basketball in the American Basketball League, has died at the age of 94. 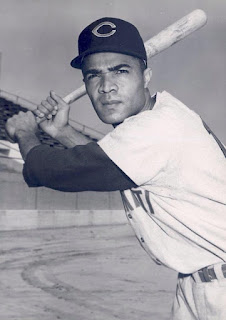 CINCINNATI — Chuck Harmon, who blazed a trail as the first African-American Reds player, has died. He was 94.

Harmon was at home in Golf Manor when he passed away at about 6 a.m. Tuesday, his son, Chuck Harmon Jr., said. The younger Harmon said his dad is in a better place with his mom, who died about 10 years ago.

It was April 17, 1954 when Harmon made his debut the Cincinnati Reds as a pinch-hitter in a game in Milwaukee - seven years after Jackie Robinson broke baseball's color barrier with Dodgers.

Segregation was still a factor when Harmon played in the majors. He had to stay in a separate hotel or private home while on the road with the team. But he told WCPO in 2017 that he was still glad he was the first.

"Somebody says, 'Ah, that guy can do this.' If he can do this, making everybody happy — I want to do that," Harmon said then.

"There was name-calling and things of that nature, but my dad always brushed it off," Harmon's son said at that time. "He was about playing baseball for the Cincinnati Reds, doing something that he loved to do, and that was the main thing - and trying to make fans happy."

After his playing days, Harmon went on to work as a scout for the Braves and Indians and settled in the Cincinnati area, where he took on other roles for the Reds. He worked in sales for the MacGregor Sporting Goods Company and an administrative assistant at Ohio's First District Court of Appeals.

Over the years, Harmon was a fixture at Reds games, Redsfest and other special occasions for the club. In 2014, Harmon received the Powell Crosley Jr. Award from the Reds Hall of Fame and Museum for his dedication and devotion to the Reds. In 2015, the Reds honored Harmon with a statue outside of the Reds Youth Academy in Roselawn. A street in Golf Manor is named Churk Harmon Way.

Harmon and his wife, Daurel, were married for 62 years until she passed away in 2009. The couple had three children.

Harmon, born in Washington, Indiana, had been a successful basketball player, playing on two consecutive Indiana state high school championship teams for his hometown school, Washington High. He went on to captain the University of Toledo basketball team and even had a tryout with Boston Celtics before he went into professional baseball.
Posted by Peach Basket Society at 11:50 AM