His named was spelled "Ginsberg" in other sources. That was why he was so hard for me to find. 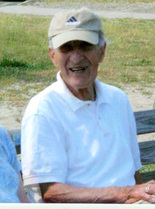 The 6'1 Staten Island native graduated from Curtis HS in 1939, and played a lot of basketball along with two brothers and a cousin in a unit known as "The Flying Ginzburgs." He went into the U.S. Army in 1942 and served during World War 2. After the war, he played five games for the Jersey Atoms and would afterwards become a postman. He retired from the USPS in 1975 and would continute to coach and umpire around Staten Island with the youth and Jewish community centers.

He married Marie Schofield and they had one son and one daughter.


Posted by Peach Basket Society at 3:46 AM