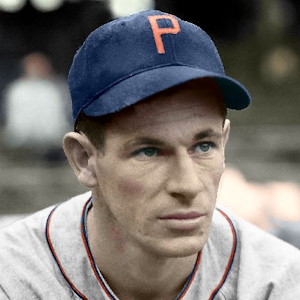 Born to Frank and Alice Hoerst in Philly, Hoerst played baseball, basketball and football at Northeast Catholic and would go on to play baseball and basketball at LaSalle. A hard-throwing pitcher and also a two-time captain of the basketball team, Hoerst would probably have pursued a basketball career professionally if a true organized and financially stable league existed at the time of his graduation. Instead, he signed with the Philadelphia Phillies after graduating and spent the 1939 season their Class D affiliate in Mayodan, North Carolina. The southpaw pitched well enough to be invited to spring training in 1940 and made the major league club. He appeared in six games with the Phils before being sent down to Pensacola, where he finished the season with a 16-7 record. He returned to the Phillies in 1941 and stayed through 1942 until the U.S. Navy called. He served through World War 2 and returned to the Phillies after the war. He stayed with the Phillies through the end of 1947 when he was sold to Memphis. In winter of 1946, he signed on to coach  the Wilmington Bombers basketball team in the ABL. Frank's brother Jim played for Frank that year. Frank would coach the LaSalle freshmen team that season, too.

After a couple years in Memphis, Hoerst was done with the game, having compiled a 10-33 record in his time with the Phils. He would later coach LaSalle's baseball team and work as an NBA referee. He worked at Gretz Brewery and rose from sales manager to Vice President, and started his own company which specialized in the manufacturing of a light-weight building material called vermicutlite.