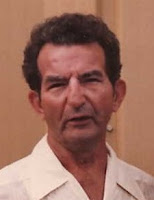 Born to Joseph and Mary Pokropski, Ed would later go by the name the "Ed Poker" while playing semi-pro basketball and baseball around the Philadelphia area. He played basketball with the House of David team a few years as well as with the Wilmington Bombers in the ABL.

Ed worked for many years as a steelworker and a machinist.

Stats:
Posted by Peach Basket Society at 9:46 AM