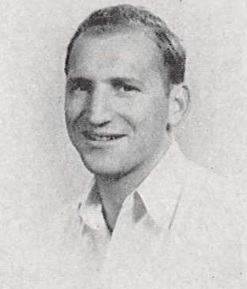 Blumenthal was born and raised in Trenton, New Jersey, and played basketball at Temple. In February of 1943, he scored the winning in a game against LaSalle, and collapsed in the locker room. He was first thought to have contracted scarlet fever, but it turned out to be the German measles. He would play one game with the Troy Celtics in 1946, scoring zero point in the season opener. He moved over to the New York League, joining the Cohoes Mastadons. Marv later moved to Houston, and died there after suffering a heart attack while playing handball in 1969. He was 44 years old.


Posted by Peach Basket Society at 4:29 AM

Email ThisBlogThis!Share to TwitterShare to FacebookShare to Pinterest
Labels: 1946-47, Troy Celtics, under 50